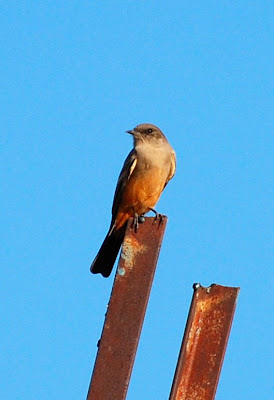 Say's Phoebe, Coolidge, AZ 11-1-08 by Kathiesbirds
On the same November morning that I saw the Eurasian Collared Dove I also spotted this Say’s Phoebe perched atop a metal ladder laid against the side of an old barn in Coolidge, AZ. The barn sat at the edge of a vacant agricultural field, a gap between the old part of town and the new subdivisions rising from the dust in the west. This bird’s hunting territory is slowly diminishing as progress grinds ever onward. It may have a brief reprieve due to the current economy, but eventually the field will sprout houses like mushrooms.
Say's Phoebes range from Alaska to Mexico west of the Mississippi. They live here in Sycamore Canyon and I frequently see them hunting from the trees in the wash. I hear their call like a tiny red-tail hawk in the mornings sometimes. Today I saw one as I walked my grandson. It flew down and landed on the metal railings alongside the sidewalk, bobbing its tail with its head feathers raised in a bit of a crest. I was not more than 10 feet from it as it watched me through dark onyx eyes. The thin autumn sunlight cast long weak shadows across the sidewalk as the bird and I observed each other before it finally flew off.
I’m currently reading a book called Of a Feather: A Brief History of American Birding

by Scott Weidensaul. One of the most interesting things I am learning from the book is where the names of some of the birds come from. Say's Phoebe is named for a Philadelphia Quaker named Thomas Say. Though trained as an apothecary, his love of nature and the natural world drove him to learn all he could. As a self-taught naturalist, he joined the 1819 Stephen Long Expedition to the west. His great uncle, William Bartram, was curator of the first natural history museum of the United States and one of his companions on the trek was Titian Peale, son of the famous American artist, Charles Wilson Peale. Say was the first to describe many of the birds and mammals of the west, but his primary interests were insects and mollusks and he published a three volume set called “American Entomology” from 1824-1828. 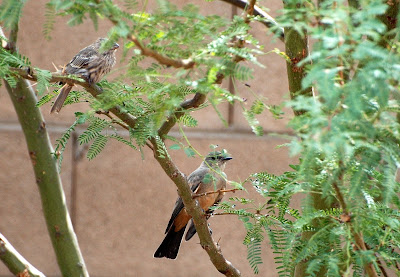 Say's Phoebe in my backyard mesquite tree 8-14-08
Sycamore Canyon near the Santa Rita Mountains by kathiesbirds.
Posted by Kathie Brown at 1:33 AM

Hi Kathie. I'm so glad to see you post this bird. I have a couple of photos of a bird with similar coloration from my visit to NM. I couldn't ID him comfortably with my field guide. One day I'll post him to see what you think. He was hanging out on the wire of an open field, reminding me of a blue bird or king bird. Great bits of historical info. Thanks.

what a pretty lil fellow. i really like birds but don't know them like i use to and i'm really enjoying your site. :)

Wonderful post, love the photo, and the info to go with! So sad that shrinking habitat will reduce our once-adundant variety to all but the hardiest, most adaptive species. We are losing vauable diversity so fast.

Great post Kathie! I enjoyed the name source info. I recently found that Weidensaul book at a used book store and tucked it on the shelf for winter reading.

Great photos.
Thanks for the links.

We generally have to go a little further West to see this bird. They are accidental East of the "interior West (Sibley)"

Your Texas Buddies,
Troy and Martha

A new cutie for me! Thank you!

Great shots, Kathie. And thanks for the history lesson on Thomas Say. I love reading about this sort of things, finding out how (or for whom) certain birds were named.

So that is what a Phoebe looks like! Very nice capture and what a wonderful encounter while out with your grandson.

Habitat for all our fellow creatures keeps shrinking. We will soon have to start building up instead of out, if there's to be any hope for them. And that would be sad too.

Vickie, I always hate it when I have a trickie ID. I so want to know what I am looking at! This ia sweet little bird that I love having around. I'd love to see your photo.

Gina, Why thank you!

Deborah, it's sad, but true. While I do see many birds that adapt to human disruption, I also know that with the loss of habitat we have loss of species. Some are so specialized that they can't deal with the loss of even small portions of habitiat.

Lynne, I am thoroughly enjoying it and I bet you will too with your thrist for knowledge of all things birdy.

Texas travelers, Photography is progessing slowly. I haven't been out much lately but when I have, I have been experimenting. The top Say's Phoebe photo was taken with the camera set on programmed. The bottom was taken with the settings on Sports mode.

tsannie, yes they are. Don't you love it! I'm just trying to tempt you to travel west!

Kyle, this is all new for me, but I like learning it too. I had no idea who this bird was named for before!

Quiet paths, I often see them in my yard or flying through the mini wash next to my house. Sometimes there will be 3 or 4 of them at once! They always make me smile!